This seminar will provide an overview of adaptive radar processing from the standpoint of bringing to bear optimally and adaptively, all available degrees of freedom on transmit and receive to address the problem of detection, tracking, and classification from a single as well as a multi-sensor perspective. The idea of closed loop radar processing will be introduced. Pertinent research challenges will be identified and ameliorating solutions will be discussed. Important issues of training data heterogeneity, computational cost, waveform optimization and design for closed loop radar detection and tracking as well as joint transmit-receive adaptive radar processing will be presented. 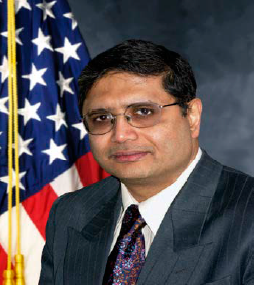 Muralidhar Rangaswamy received the B.E. degree in Electronics Engineering from Bangalore University, Bangalore, India in 1985 and the M.S. and Ph.D. degrees in Electrical Engineering from Syracuse University, Syracuse, NY, in 1992. He is presently employed as the Senior Advisor for Radar Research at the RF Exploitation Branch within the Sensors Directorate of the Air Force Research Laboratory (AFRL). Prior to this he has held industrial and academic appointments. His research interests include radar signal processing, spectrum estimation, modeling non-Gaussian interference phenomena, and statistical communication theory. He has co-authored more than 200 refereed journal and conference record papers in the areas of his research interests. Additionally, he is a contributor to 9 books and is a co-inventor on 3 U.S. patents. He received the IEEE Warren White Radar Award in 2013, the 2013 Affiliate Societies Council-Dayton Outstanding Scientist Award and the 2005 IEEE-AESS Fred Nathanson memorial outstanding young radar engineer award. He was elected as a Fellow of the IEEE in January 2006 with the citation “for contributions to mathematical techniques for radar space-time adaptive processing”. He received the 2012 and 2005 Charles Ryan basic research award from the Sensors Directorate of AFRL.